David In the News

A Republican legislator says he will introduce a resolution Friday calling on state House Speaker David Ralston to resign his position, after an investigation by The Atlanta Journal-Constitution and Channel 2 Action News found he frequently delayed criminal court cases by claiming the dates interfered with his legislative duties.

The announcement by state Rep. David Clark of Buford, came after more than a week of silence on the issue from most House lawmakers, Republican and Democrat alike.

Ralston, who has a law practice in Blue Ridge, said in his first interview since the report published that he isn’t going anywhere. He told Channel 2 Action News that he did nothing wrong and that he was confident his position as the leader of the Georgia House was secure.

Clark, the chairman of the House Interstate Cooperation Committee, said that after the news reports he received numerous calls, texts and emails from constituents who wanted to know his stance on the issue. Then he met privately with Ralston, Clark said, asking the fellow Republican questions about specific cases, and found his answers vague.

“I feel betrayed. What’s right is what’s right. But I can’t continue if someone is lying to our family, our caucus,” Clark said.

Clark, who served in the military in Afghanistan, said he knows he’s taking a risk. Ralston wields immense power in the Legislature, deciding on chairmanships, committee assignments and what programs receive state financing. No bill or budget wins passage without his blessing.

“I don’t look at the endgame. It’s what’s right,” Clark said. “I love the speaker. I have nothing personally against him. But I can’t just go along to get along.”

He would not say how many other supporters had signed on to the measure, which will be a major test for his effort. If he attracts only a handful of names, it’s not likely to gain any traction. 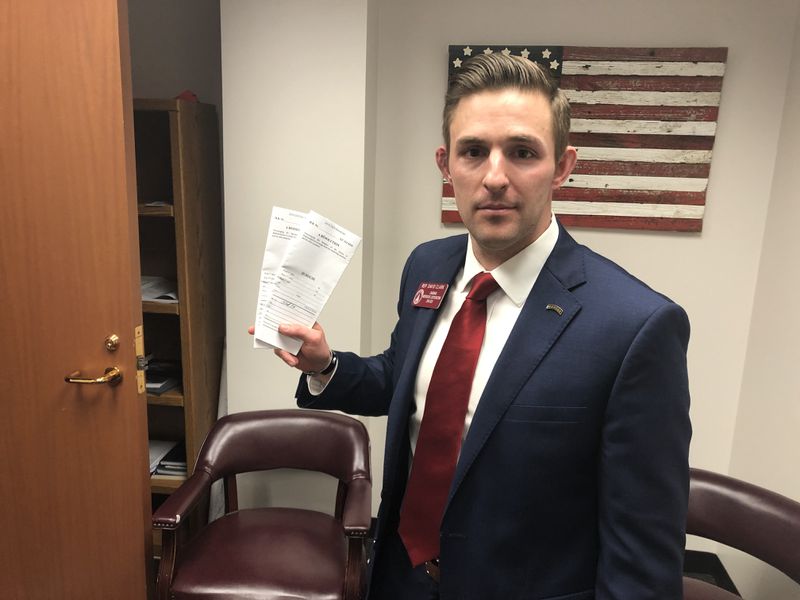 Scrutiny of Ralston’s law practice has grown since the AJC/Channel 2 investigation found that Ralston asked judges to reschedule court proceedings 57 times over a two-year period, using a law dating to 1905 that requires the judiciary to defer to legislative duties. It resulted in delays, sometimes for years, for clients charged with child molestation, child cruelty, assault, terroristic threats, drunken driving and other crimes.

One client facing up to 20 years in prison on domestic violence charges told the AJC he paid $20,000 to hire Ralston — specifically to delay his case so that the passage of time would erode the evidence against him. Victims said Ralston’s delay tactics are so well known in the mountainous counties of North Georgia that it was crushing to learn he had become involved in their cases.

Over the past week, Ralston has rallied supporters to try to stave off any threat to his leadership post. He told Channel 2 on Thursday that he has done nothing unethical and did not use the legislative leave law to his advantage.

He also said he’s not legally required to put his requests for leave in writing — which generated records allowing reporters to tally the number of times he put off court dates.

“I think that’s the respectful and courteous thing to do for the court and opposing counsel,” Ralston said.

Ralston said he believes he has the support of most of the House, but “others, I hear, are not so supportive.”

“But they’ve been on me for years, so you give them a reason to get on me, they get on me,” Ralston said. “It comes with my job.”

There were signs Thursday that Ralston’s supporters were circling the wagons. Two former governors who are also attorneys offered Ralston the highest-profile expressions of support in separate interviews with the AJC.

Former Gov. Nathan Deal, a Republican, said the law that requires judges to grant a continuance to attorneys was designed to help lawyers, particularly those from outside metro Atlanta, serve in the General Assembly.

“I fully appreciate the situation that lawyers who live outside the commuting area run into at the General Assembly,” Deal said. “I know David Ralston. I know he’s an honorable person. And I know, as soon as possible, he’s going to dispose of those cases.”

And former Gov. Roy Barnes, a Democrat who represented Ralston in a State Bar of Georgia complaint settled in 2016, said that the law helps ensure that the makeup of the Legislature is of citizen-lawmakers and not full-time politicians.

“You have to make accommodations for folks, or you end up with a professional Legislature. You know that’s what happened to Congress when they went full time,” Barnes said. “He’s been piled on pretty heavy, but there’s another side to this. It’s foolhardy to call for his resignation.”

Along with Clark, one other Republican lawmaker went on record opposing Ralston this week. The speaker supported state Rep. Matt Gurtler’s opponent in the GOP primary last year, and Gurtler sent a statement to the AJC saying, “We have to remember that legality and morality don’t always align.”

Clark said he was shaken by the news reports, which he said proved that Ralston used his office to thwart justice and benefit his private practice.

As the years pass in a delayed case, opportunities increase for witnesses to back out of testifying, victims to decline to cooperate, memories to erode, police investigators to quit or retire, and evidence to disappear.

Find the Article on the AJC.com